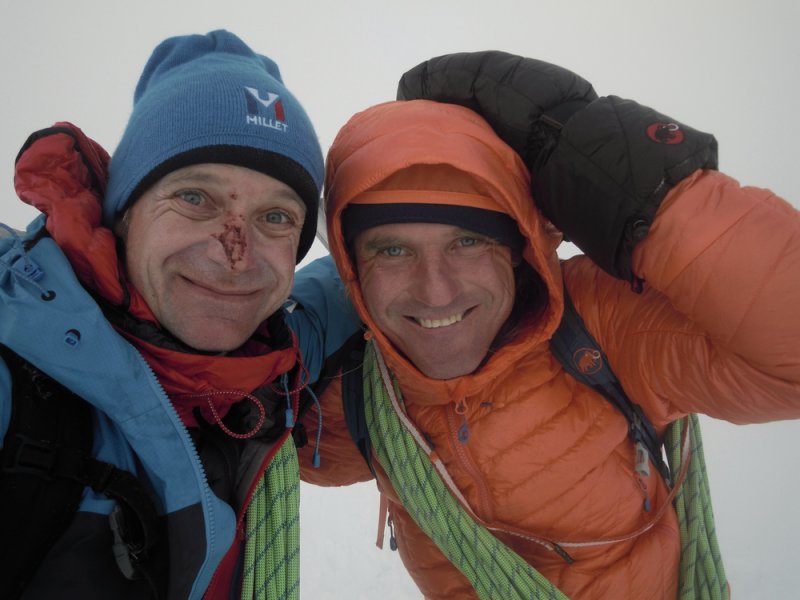 Our target was Mount Wheat with four individual summits forming the Wall Range. It is located on the 30-kilometre-long Winkle Island, close to the Antarctic mainland, separated from it by a narrow strip of ocean. I had seen this peak already in 2014 when I climbed in Antarctica for the first time. At that time, we managed to climb a neat first ascent to a nameless peak of the Anwers island. We named the peak Monte Samila. It was about 1500 meters of difficult climbing in ice and not-holding firn. We returned back aboard our yacht after 24 hours of fighting and the return itself was quite dramatic. Afterwards we sailed to the above-mentioned Winkle Island but the weather was not on our side, thus we had no time for climbing. However, the monuments of this island with its virgin summits indelibly registered into our minds. There was nothing left but to return. The new story begins to unfold on December 27, 2017, when our 17-meter long yacht sails from the port of Ushuaia in Tiera del Fuego, Argentina. I will keep the narration about crossing the stormy Drake Passage for some other time. We will skip few days of sailing through the stormy ocean and also the following zigzaggery among the ice floes in the fabulous landscape of the Peninsula. After ten days, on January 5, 2018, we finally anchor at the bay of Port Lockroy.
The next day around noon we are carried from our yacht to the mainland by a small boat. My climbing partner was my friend Míra Dub. We reached the foot of the face on skis before 2 o’clock p.m. and already at half past two we are ascending the steep firn. The ascent line followed an icy couloir in the granite massif, which was getting steeper and steeper towards the summit until it got upright. The worst part was waiting above the vertical section where a huge snow cornice was rising. Honestly, it was the subject of my concerns from the very beginning. How shall we overcome it? This was an unanswered question and for the answer we had to climb up to it first. Moreover, ice greetings from it could have hit us underneath in the couloir anytime.
Hours of climbing were passing by and the difficulty were growing gradually. Meanwhile, in the late afternoon, the sun turned into our face and small avalanches of ice and stone fragments begun to fall from the top. One stone found Míra’s nose. Fortunately, there was only a little blood and we could continue.
Around eleven o’clock p.m. we are reaching the vertical sections. It was an aerated and not very good ice. I climbed the entire 30 m long vertical section without any ice screws. Only two sporadic protections were established from the belay station far below my feet. This section took a lot of effort and nerves. However, I did not know yet that the following pitch would be a mixed climbing in broken granite and fluffy and not holding snow.
Time was running out, the cold was rubbing under the skin, and our strength diminished. After a few more hours of difficult climbing I am standing in front of the key spot of the face. The snow cornice above my head is derisively laughing while I am searching the way. Finally, I venture into the least overhanging part of this inflated cotton wool. The climb-through was a terrible experience, my feelings are quite hard to describe. The whole face was underneath my feet and I had the feelings that neither ice-axes nor crampons would hold on to anything.
At two o’clock a.m. we both reach the nameless summit. From the valley, the fog is steadily rolling, and in a moment the views disappear and everything is hiding in the white darkness. So, we cook some tea and we pitch a small tent. We have neither sleeping bags nor mattresses, but it covers us at least against the wind and chill. Four hours later, the fog is torn apart and so we quickly pack and walk along the ridge. We are looking for a suitable descent but the walls to each side are quite steep. Another problem is that the ridge is bordered by cornices that prevent a reasonable descent and a downward view. We have to cross the entire ridge of the four summits and after several unsuccessful attempts to descend we finally find a climb-through the wild glacier.
We close the adventure at the ocean coast after 33 hours. We are picked there into the small boat by our mates from the yacht. Both of us are happy because all squared well and it was an amazing day at Antarctica. Onboard the yacht, while sipping the first bottle of wine we finally discard our concerns, fatigue and stress of the previous days. Together with our friends we laugh into the night.
Mára

The first ascent on the individual southwest summit, which we named “Monte Pizduch 1000 m”, situated in the massif of Mount Wheat 1200 m. The name of the new route is “Bloody Nose” and it was climbed in the alpine style. During the search for the descent we crossed the complete ridge of four summits. It took 33 hrs, January 6-7, 2018. 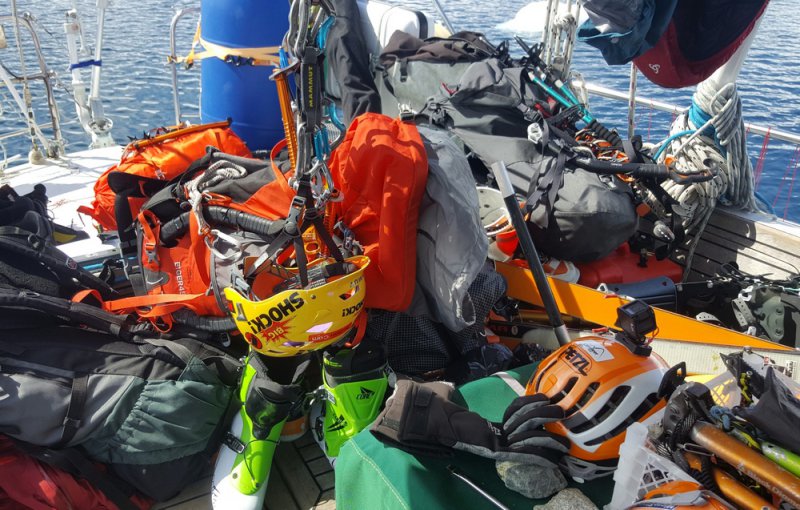 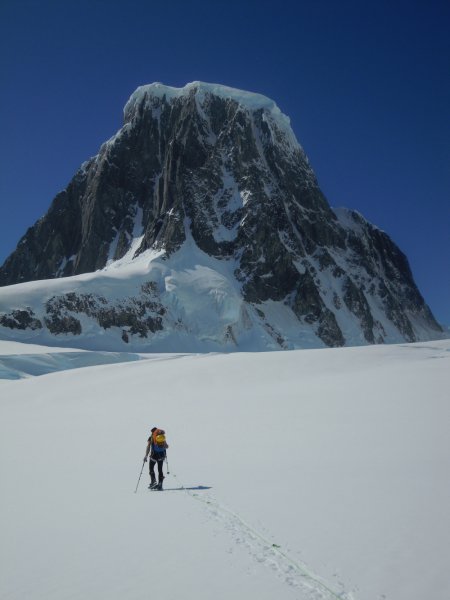 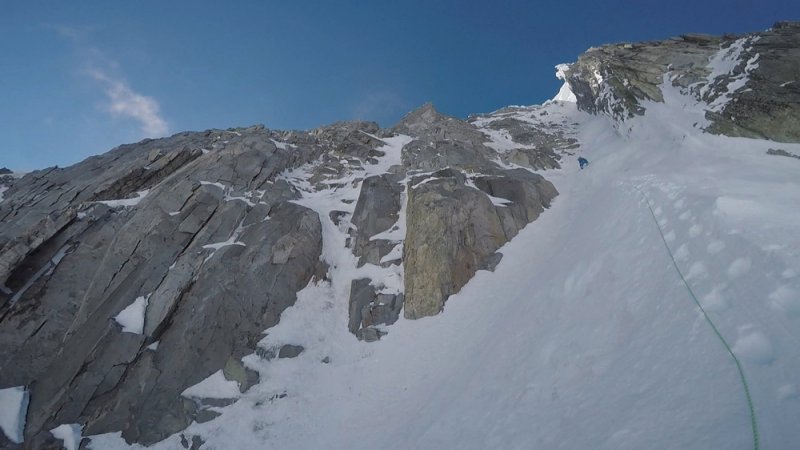 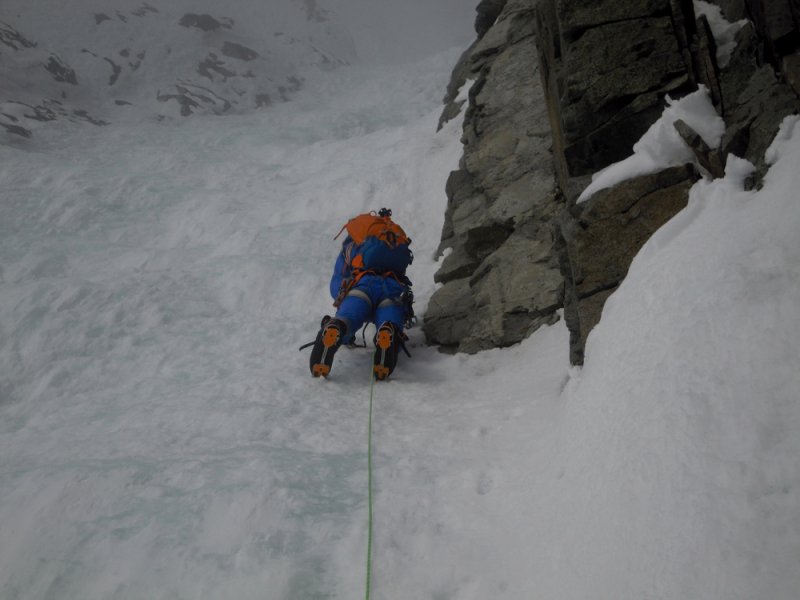 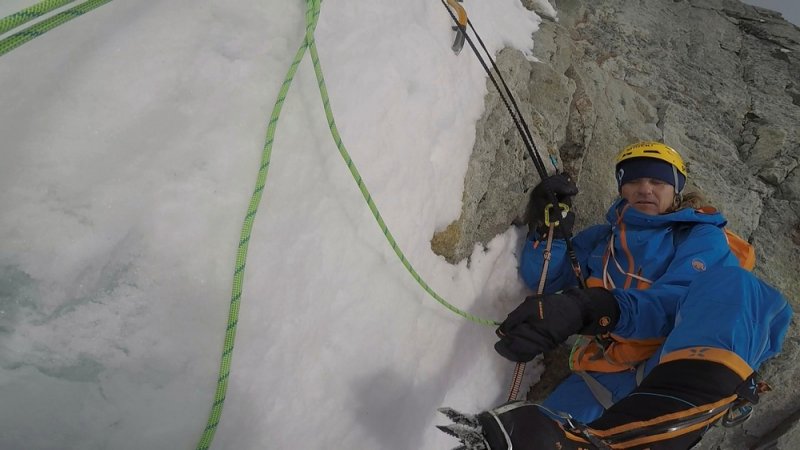 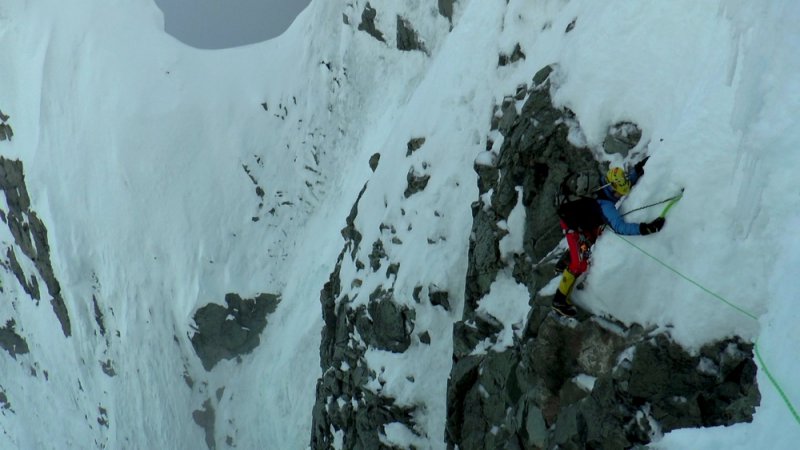 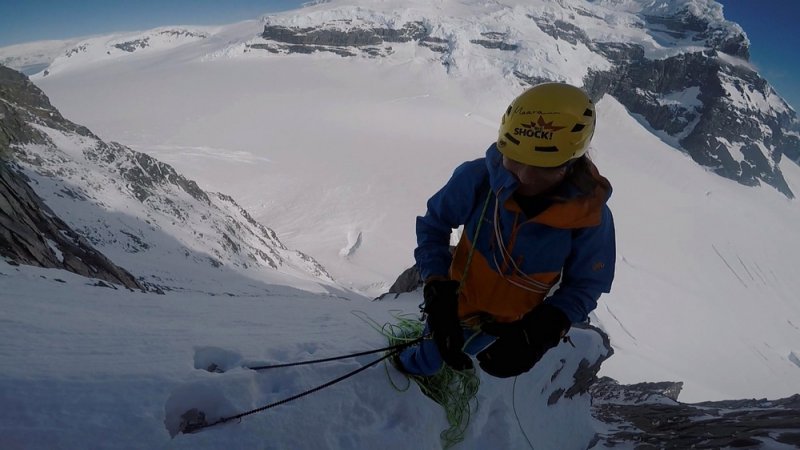 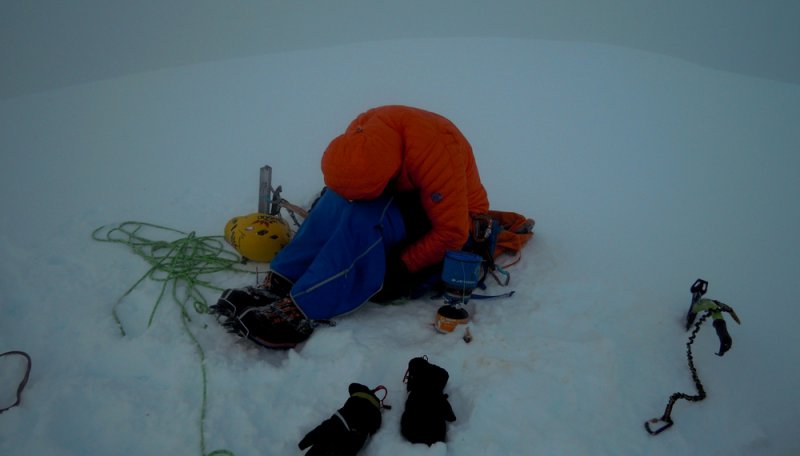 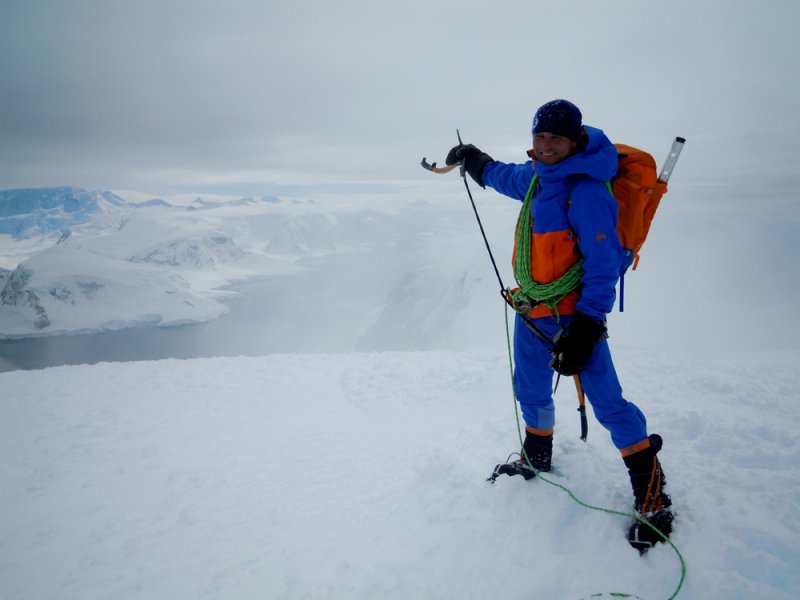 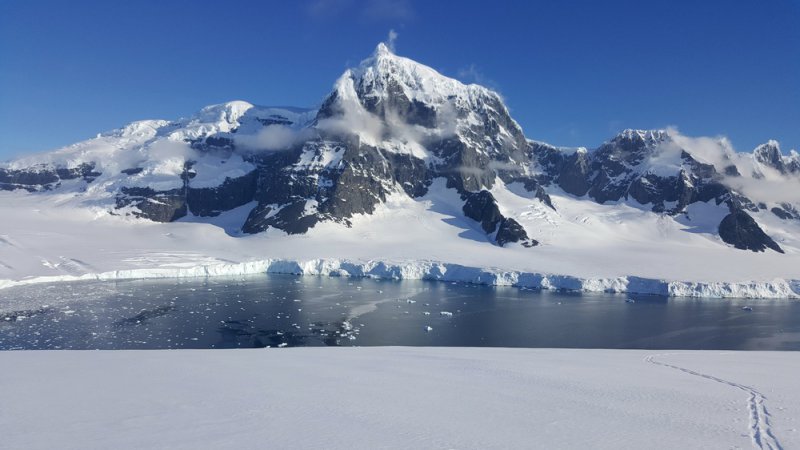 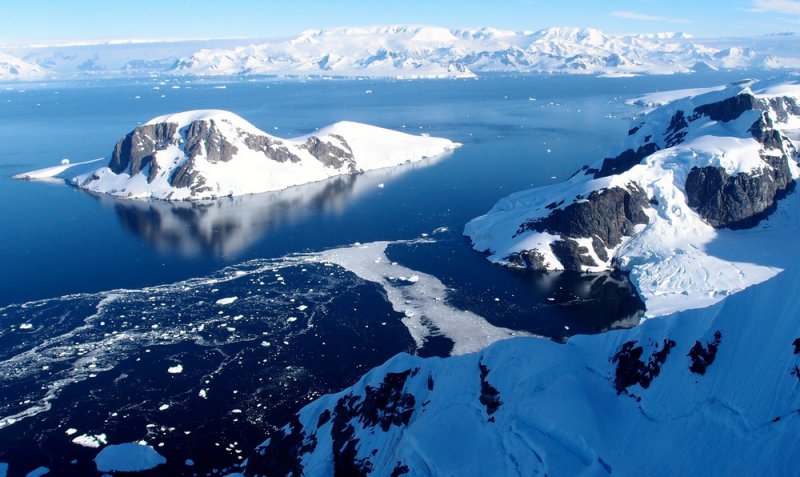 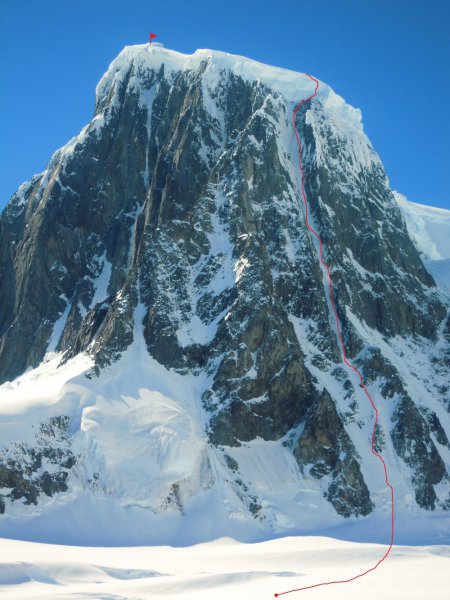 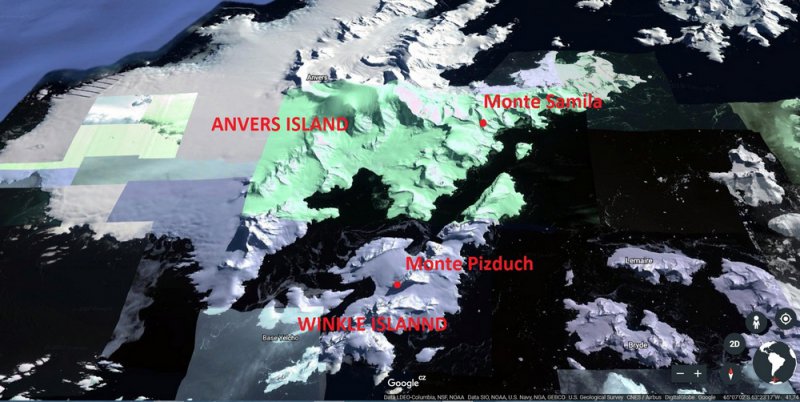 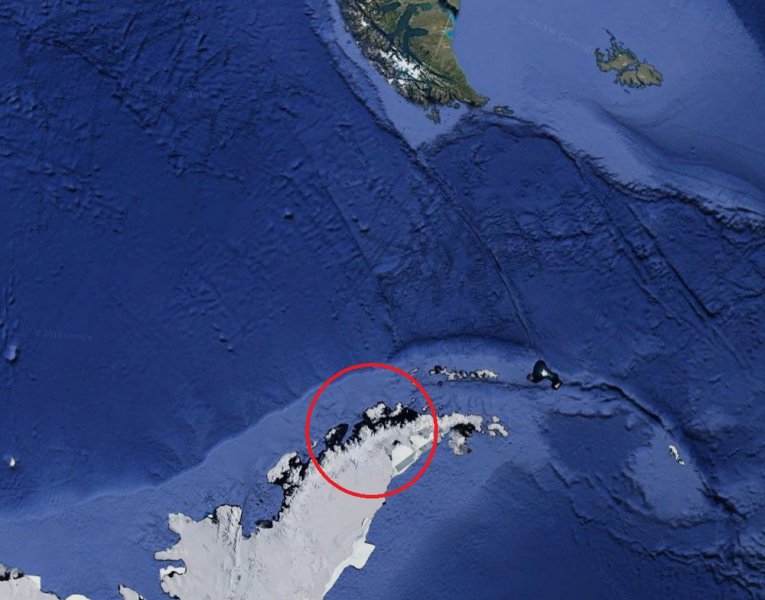 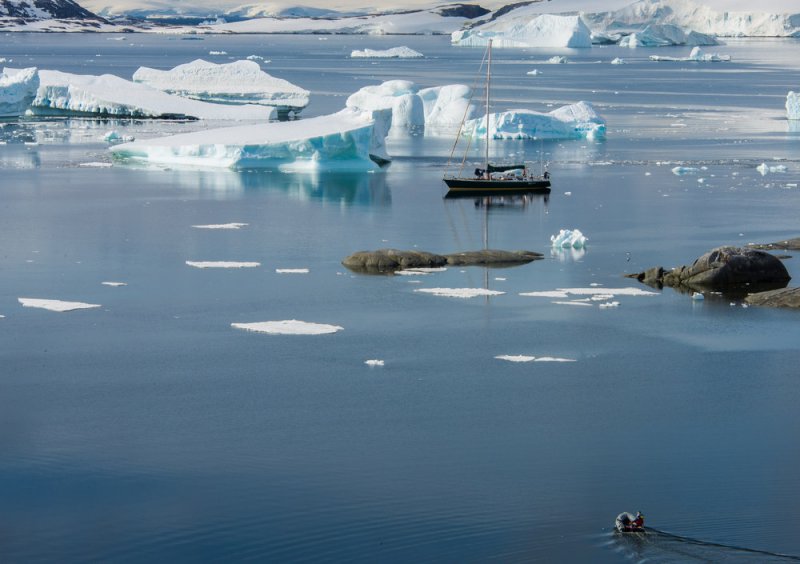 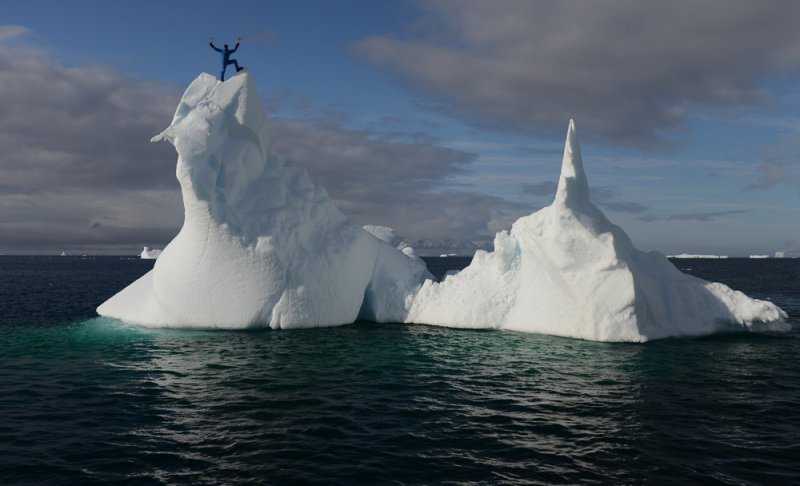 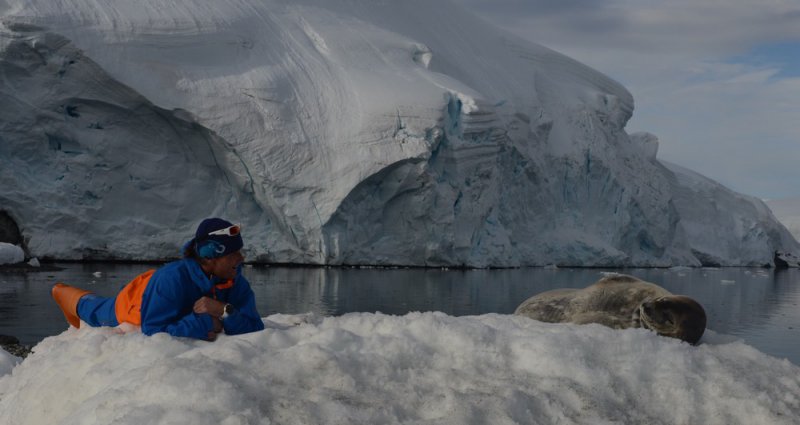 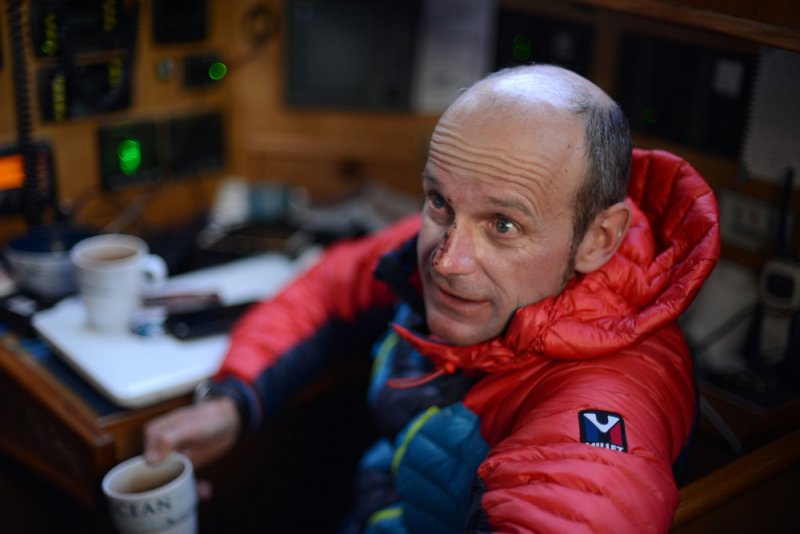 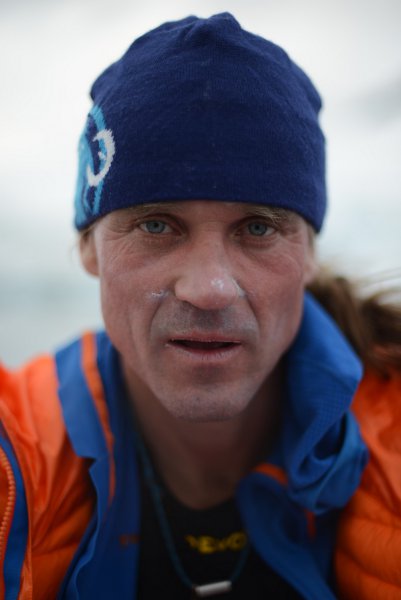