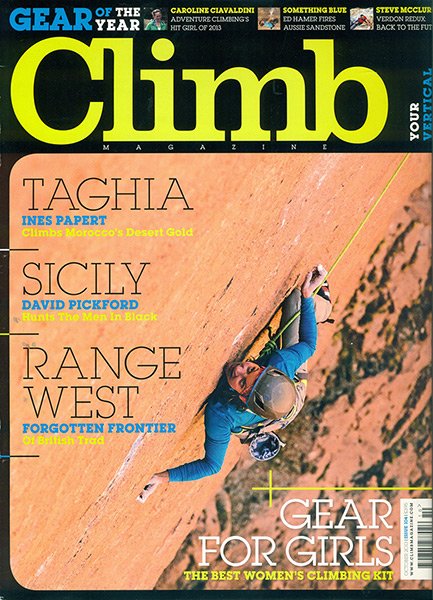 Mountain World - Thumba Party
Climb Magazine – Your Vertikal World
WWW.CLIMBMAGAZINE.COM - OCTOBER 2013
Lindsay Griffin profiles leading Czech mountaineer Marek Hoiecek and his attempts on the impressive Nepal-Sikkim 7000er Talung,a peak which has seen attention from several of the finest mountaineers history
Arguably the most significant alpine-style ascent in the mountains of Nepal during this year's pre-monsoon season was the first ascent of the north face of Talung (7,349m).
The name may not be immediately familiar, and this remote peak straddling the Nepal-Sikkim border has seen relatively few serious attempts. Yet it is well-known to all those that have tried the normal route on Kangchenjunga, as it lies immediately south of the world's third highest mountain. There is also a strong British connection, as Talung has a firm place in the run up to the first ascent of Kangchenjunga, and quite recently formed the goal of the party allocated the 2012 Nick Estcourt Award.

Talung was first reconnoitred by Ferdie Crawford and Harold Raeburn as part of an inspection of Kangchenjunga, in those days approaching Nepal from Sikkim in British India. They climbed to around 5,800m from the west. Tile next foray onto its flanks didn't occur until the spring of 1953. John Kempe, later headmaster of the famous Scottish public school Gordonstoun, and Gilmore Lewis, walked up the Talung Glacier, attempted Boktoh and Koktang, and then with a Sherpa companion made a valiant attempt on Kabru (7,412m). The three climbed up the southwest flank of Talung to the ca 7,120m shoulder at the north end of the Kabru ridge, but worried about snow conditions on their return, decided not to continue south to the various Kabru summits, despite the way being easy. From this point Kempe saw that a route on the southwest face of Kangchenjunga was feasible, despite opinion to the contrary by noted previous observers such as Frank Smythe.

The following year Kempe was back with a bigger team for a full Kangchenjunga reconnaissance, this time fully inspecting the route that would be used for the first ascent the following year. Kempe, Lewis and John Tucker made an attempt on Talung but again were too far right on the southwest flank and found they were unable to gain the upper west face. During the successful 1955 Kangchenjunga expedition Tom McKinnon and Neil Mather climbed to ca 6,500m on Talung before forced back -by storm. As successful Kangchenjunga summiteer George Band noted, 'Talung will be a nice peak for a small party one day'.

Japanese climbed quite high on the mountain in 1963 but the first ascent came the following year, from a primarily German team, with Franz Lindner
(Austrian) and Tenzing Nanda Sherpa reaching the summit. Lindner first climbed the southwest flank to the 6,983m col separating the summit from the Kabru Massif to the south. He continued up the ridge to Talung's 7,180m south summit but time was running out, the ridge above looked difficult, and he realized the going would be much better lower down on the west flank. Returning with Tenzing Nanda he did just that, leaving his previous line on the southwest flank and slanting across the west face more or less direct to the main summit.

A second ascent was not made until 1991. Slovenians Marko Prezelj and Andrej Stremfelj climbed a partial new route up the west-northwest face to upper west face. Prezelj reached the summit in high winds, but Stremfelj, who had a bad cold at the time, waited 50m below the crest of the south ridge. These two made only one bivouac and used Talung for acclimatization before making their historic alpine-style first ascent of the southwest ridge of Kangchenjunga South. Japanese tried to repeat the Slovenian line in 2002, the same year that Martin Otta's expedition from the Czech Republic made its first attempt on the mountain. Alena Cepelkova and Petr Kolouch tried the north-northwest pillar. They climbed 500m to ca 5,900m but retreated, as unconsolidated snow over rock made the climbing too precarious. Cepelkova, an accomplished mountaineer with ascents in the Greater Ranges, served two terms as President of the Czech Mountaineering Association but is perhaps best known for making the first winter ascent (with Zusanna Hoffmannova) of the difficult Isherwood-Kosterlitz route on the Piz Badile, the first time that an unaided women's team had made a first winter ascent on a big alpine wall.

Later, Cepelkova and other members of the expedition attempted a new route on the left side of the west-northwest face, descending from 6,600m, while the remaining climbers more or less followed the 1991 Slovenian route, Kolouch reaching the top to make the mountain's third ascent. Otta returned in 2004 bringing Holecek and Rinn, but although several different lines were attempted, the mountain resisted their efforts.

In November 2012 the north-northwest pillar was once again an object of desire, this time for British alpinists James Clapham, Gavin Pike and Dave Searle. The three found the Yalung Glacier to be receding at an alarming rate, and after initially acclimatizing to 6,400m on the original southwest face route arrived at the base of the pillar to find, like Holecek this year, the pitch off the glacier was bare and dangerous. Sixty metres of vertical or overhanging rock, with blobs of névé and no obvious protection, did not appeal. They decided to switch to the less demanding northwest spur, but very high winds and low temperatures subsequently allowed no opportunity. This and the unattempted northeast (frontier) ridge of Talung would provide good objectives, although the approach to the latter appears to be objectively threatened.

Just before going to press Zdenek Hruby was tragically killed descending Gasherbrum I after a failed attempt with Marek Holecek.