PRESTIGIOUS EXPLORERSWEB SERVER CHOOSES TEN THE MOST VERY EXTREME PROJECTS OF 2019. IN THE THIRD PLACE FIGURES OUR FIRST ASCENT TO CHAMLANG 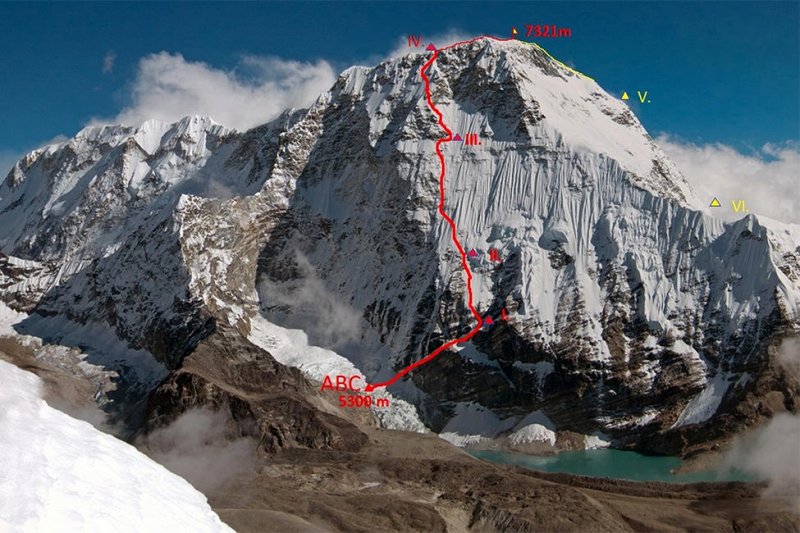 Top 10 Expeditions of 2019: #3: Chamlang
Over the last 12 months, ExplorersWeb has documented incredible adventures in climbing, cycling, running, walking, skiing and anything involving force of will and dedication to a dream in the outdoors. As this year comes to a close, we present our countdown of the Top 10 Expeditions of 2019.
This year, the crowds and unnecessary tragedies on Everest cast shadows over the entire Himalaya and the climbs done there. Yet some spring Himalayan adventures were brilliant old-fashioned alpinism. Foremost among these was the new route on Chamlang, a 7,319m peak in the shadow of Makalu. During an alpine-style, eight-day climb, Marek Holeček and Zděnek Hák of the Czech Republic etched a new line up the 2,000m Northwest Face. It proved that exploratory mountaineering remains vibrant. It also showed, incidentally, how to lose weight up in the mountains. Excerpts from Marek Holeček’s journal: “May 23, we managed to complete the first ascent of the Northwest Face of Chamlang, which has been attempted by many expeditions in the past without success. Chamlang looms 2,000m over the Hongu Valley, rising up from a moraine beside a lake. It reminds us more of a solitary peak than an integral part of the central Himalayan ridge with numerous other summits. I have had this goal in mind for nearly 20 years.
“We had several obvious problems to cope with. The sheer vertical face offered no obvious “weaker” part. We were sure to find very hard mixed sections as well as areas of pure rock and ice. The other objective danger was the lack of natural shelter up on the wall, where we could hide in bad weather. Similarly, from what  we could see, good bivouac spots were also very rare. This left a clear message: We have to be fast. We also had to think about how to get down from the summit. No route offered an easy retreat.
“On May 16, we crossed the glacier and spent a night at the foot of the climb, then started moving the first metres up at dawn. We packed a small bivi tent, one 80m rope 7mm in diameter, 6 ice screws, 5 pitons and 5 Friends. We also had food for five days plus three gas cartridges.
“The following days turned out to be what we’d expected: Loose rock lower down, followed by hard mixed climbing and concrete-like ice. Bivouacs became worse the higher we went. Eventually, we had space for about half a body, while we needed to seat our two butts there. On May 20, we reached the top of the face and traversed the summit ridge, including the main summit, on May 21.
“The two-and-a-half days of descent were a hard fight to return among the living. The dangerous ridge and a steep icefall took all our energy and nerves. We ran out of food, and both our bodies and minds felt really used and exhausted. Finally, on May 23, we reached the base of the face, fulfilling a childhood dream.
“We returned to base camp with no one waiting for us, just one package of dehydrated food in a single tent. No celebrating crowds. The next day, we loaded the base camp on our sore backs and crossed the Mera La Pass toward civilization. We were done!
“We dedicated the climb to the memory of the 1981 ascent of Reinhold Messner and Doug Scott, who supposedly saw a UFO above Chamlang…Who knows, perhaps they did. All I can say is that I saw an alien next to me all the time: It was Zdeněk Hák, my partner. We both agreed that this was the hardest thing we’d ever done together in the mountains.”
The level of excellence shown by this climb and the bold, pure style in which Holeček and Hák did it makes us optimistic about the enduring potential of real alpinism, away from the crowds and the normal routes.